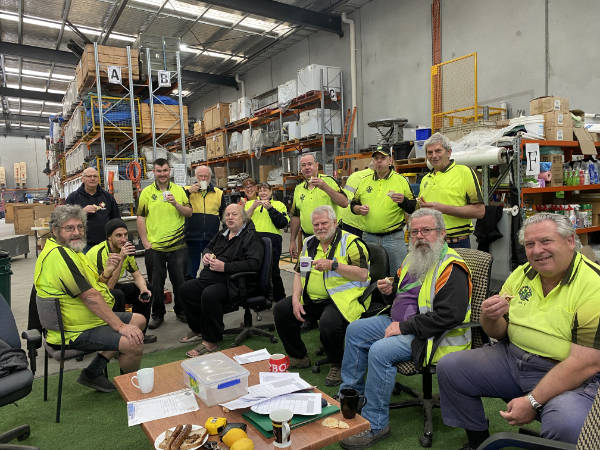 The ‘GO’ button has been pressed. After months of discussion, planning,  and COVID-19 lockdowns the expanding FoQs (Friends of the Q Store) has swung into action. The Scout Q Store officially joins the VicJam effort to get VicJam, Elmore, on the Map. Scouts under canvas at last. The excitement is building.

The Event and the People

VicJam is the Scout event for approximately 3500 Victorian Scouts in January 2022. Ducky (Peter Duckworth) is the VicJam director of Operations. Under his umbrella are many, many aspects, too hard to explain, of the infrastructure of the event. He and the other directors, under the watchful eye of Jon Willis, have been working through the gzillion details that go into a Big Event. Enter Big T (Trevor Howlett). He is the general manager of Logistics and normally the State Quartermaster. The Q Store is a warehouse in Dandenong South filled with equipment. The FoQ’s are the team of Scouters who do the hard work! The Q Store team is expanding to manage the pre-camp tasks. Are you confused yet?

It’s about the Gear

Scout units all over Victoria are gearing up to form VicJam Units. Sleeping tents, eating shelters, cooking gear and the like. Ducky, Big T, the FoQ’s and others are sorting, ordering, reconciling, justifying, accounting for, hiring everything else that a Big Event needs. Think of something you might need for a Big Event. It is highly likely that the Q Store will handle it at some point. Here is a sample: Cool rooms, freezer trailers, washing machine, marquees, power-boards, recharging stations, lighting, washing-up stands, gazebos, big eskies, traffic control items, fencing, shade-cloth, artificial turf, fatigue matting, fork-lifts, tables, chairs, printers, desks, ovens, stoves, cable ties, and the list goes on and on and on. Existing gear is being checked and repaired. New gear is being received and checked. There are containers to be loaded, trucks to be driven, tales of past events to be relived and new memories being made. The jokes are as bad as they ever were!

What is it all for?

This is the easiest part of it all. Scouting is a leadership and development program for children and young adults. Big Events are an integral part of the program. The Q Store mob have either been scouts, leaders or both. They have seen, first hand, the benefits of Scouting and are happy to remain involved, albeit behind the scenes.

Out of Lockdown Gathering

Last Saturday, the FoQs gathered at the Q Store. A quick lunch of snags in bread, courtesy of head cook Ian Herron, and then back to it. We managed to gather them up for a photo. For more info on the FoQs – get in touch. VicJam 2022 – bring it on.